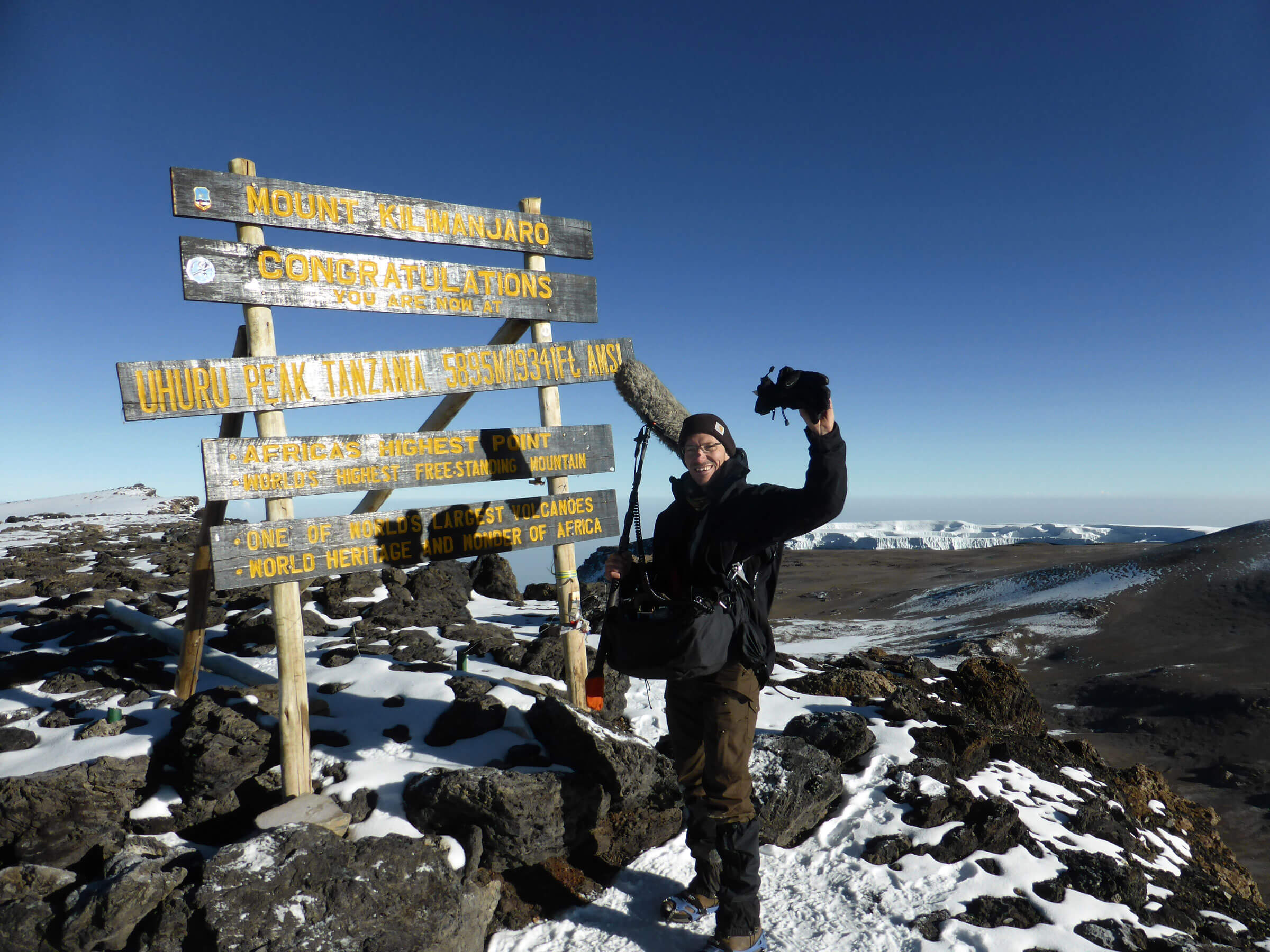 Pete Lee is not new to working in the rugged wild. Adventure is second nature to him. A look at his resume show’s the challenges he’s used to: Sound Supervisor on Special Forces: Ultimate Hell Week, Sound Recordist on Trailblazers TV Series, Sound on Man Vs. Wild Series, and the list goes on.

So when he was called on to scale the world’s highest free standing mountain, while providing sound, Pete was in.

“The Pledge World Kilimanjaro climb was an unusual shoot for me” he says “It is a branded content piece. The agency in charge brought in Secret Compass to run the expedition and planned to use a regular commercials crew to shoot it.” But this was no ordinary production. He had worked with Secret Compass before and they knew he could deliver high end results to satisfy the agency and client.

To prepare for the climb Lee checked out his sound gear. He decided on his 12-track recorder which he had moved up to around the time he discovered K-Tek. He recalls, “When I first tried the Stingray Mixer Bag with a full load of kit, it instantly sat well on me. The storage on the side distributes the weight much better, and the harness attachment points are in the right positions for me too. I can wear it for a full day and not end up in pain or feeling broken—something that was never a given with other mixer bags, even with smaller rigs. I then moved my smaller 6-channel rig to a Stingray as well and wouldn’t change to anything else. Other recordists I know have since followed suit and had similar experiences.”

He learned of the Stingray Backpack when a colleague pointed out an ad while they were on another very active shoot, a Special Forces-based competitive reality show, SAS: Who Dares Wins, UK Channel 4, Minnow Films. “The sound recordist suggested that it might make our lives much easier for future similar situations.”

That’s just what it was designed for–to make sound recordist’s travel to locations easier, quicker, and more convenient, regardless of the terrain. Packing and unpacking is speedier because the fully-loaded Mixer bag docks onboard and is secured within the Backpack. Ample storage pockets, breathable mesh exterior, multiple MOLLE attachment points, laptop compartment, rain cover, and a rugged lightweight internal frame supports the load comfortably and safely.

When the opportunity to climb Kilimanjaro arose, Lee remembered the Backpack. He bought it, and wasn’t disppointed, “It surpassed all my expectations, and was indispensable with superb quality, comfortable rucksack straps. It allowed quick access to my kit when I needed to shoot or pack up and move. I put a Camelbak water bladder into the laptop compartment.” He also upgraded the standard raincover to a larger size to accommodate his hefty 12-channel sound kit.

“While crewmembers often like to hand over their gear to porters, I need to have everything handy, so I don’t hold up the shoot, setting up sound,” Lee explains. “So I carried my sound kit including a Sound Devices Recorder and Zaxcom radio mics inside the Stingray Backpack, approximately 17kg (37.5 lbs) over 45km (28 miles) distance, while ascending and descending approximately 4km 2.48 miles vertically.”

What’s Pete Lee say about being the first to bring a Stingray Backpack and Mixer bag to the summit of Mount Kilimanjaro? “The Backpack is bloody brilliant!” 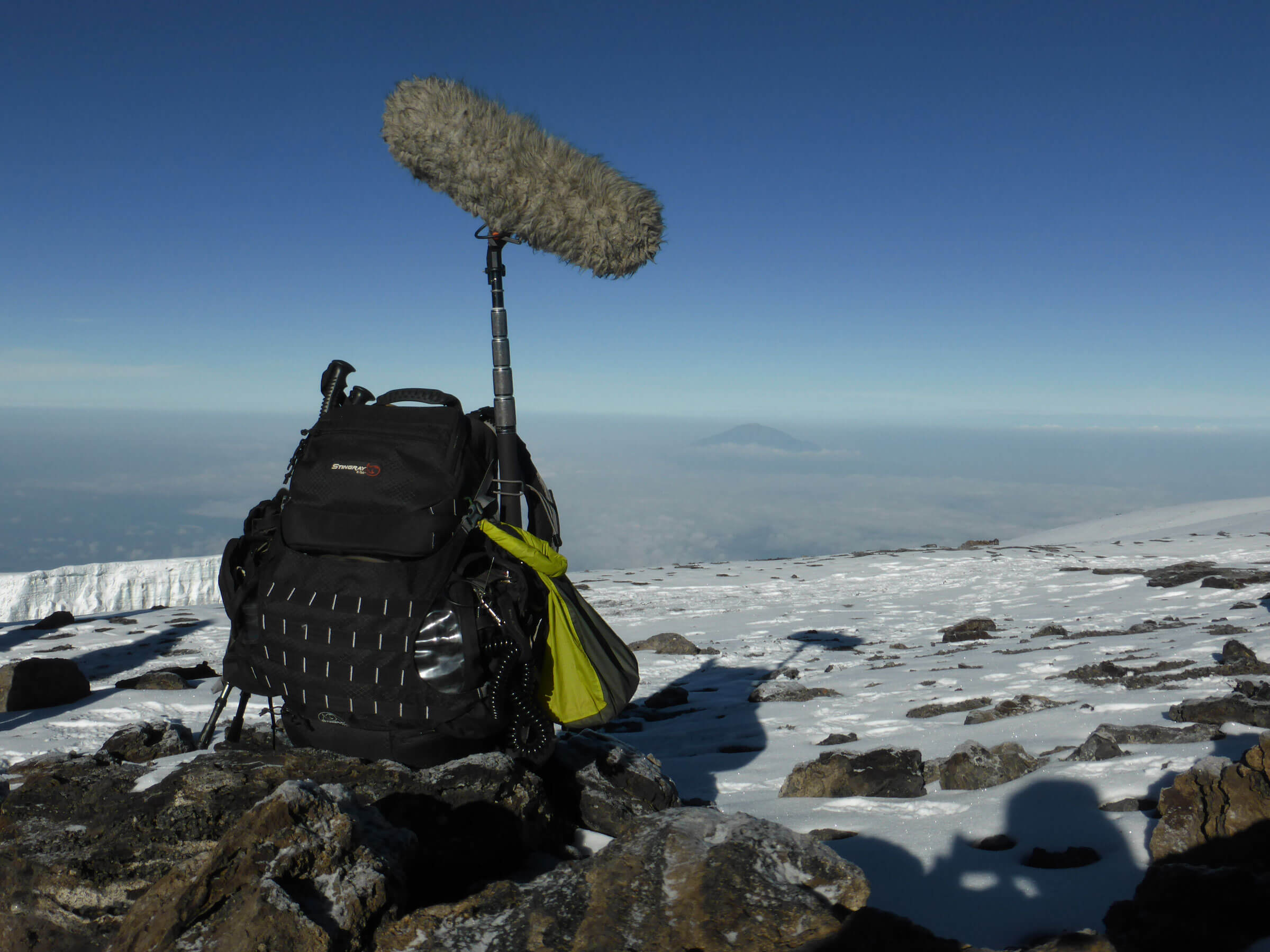